Allergic reactions to iodine can range from mild to quite severe but overall, they thankfully are extremely rare. It is questionable whether our bodies can be truly allergic to iodine, since we have this element in our body in trace amounts naturally. It is used, for example, in the production of our thyroid hormones. 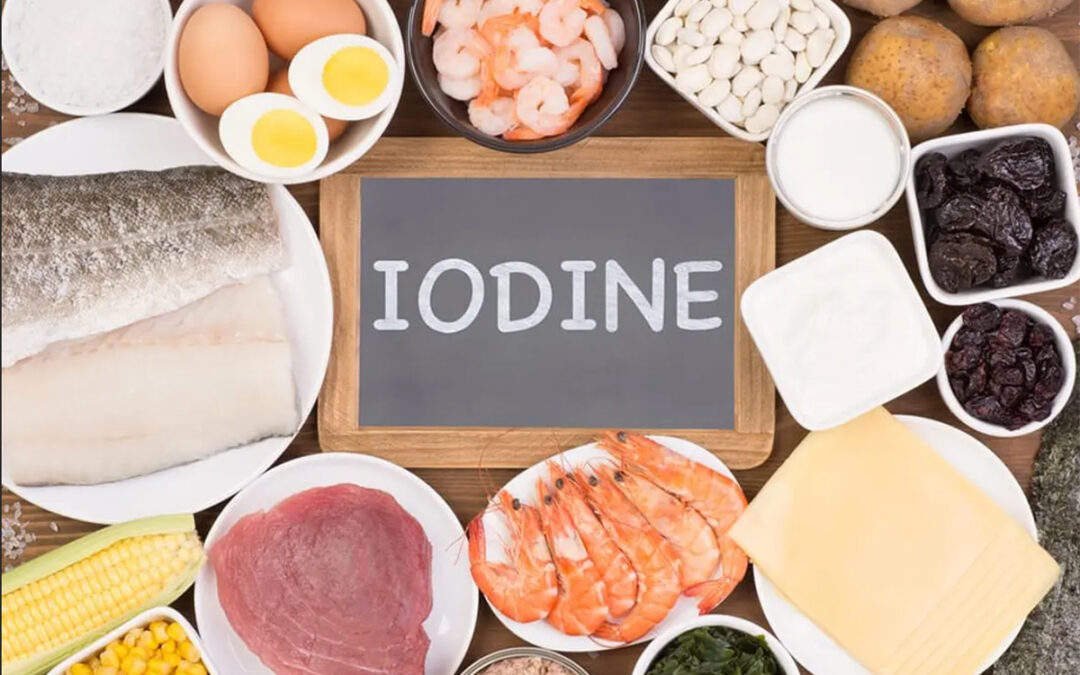 There are many foods that contain iodine in at least trace amounts. One common example is seafood, which also happens to be one of the more common foods that can cause allergies.

A true iodine allergy is difficult to work with because small amounts of it are found in many meats and vegetables. Beef, egg yolks, and dairy products all contain this chemical. How much that occurs in each will depend on what the cows or chickens are being fed, and is highly variable.

People may think that an allergy to shellfish is down to iodine, because they have learned that fish are rich in this element. So the two get connected, inappropriately, into an allergy. A reaction to fish or shellfish (e.g. shrimp) is usually triggered by proteins, (e.g tropomyosin) and is not an ‘iodine food allergy’.

Always consult your doctor or a specialist to help you figure out exactly what you are reacting to. You could find out that you are allergic to various seafoods and need to avoid these.

In general, marine (sea) fish will have more iodine in them than fresh water varieties. The actual amount in any given fish is also highly variable, and most occurs in the animal’s head.

Red Dye #3 (E127 in UK) contains iodine. You might find iodinated salt, though this is not as popular as in the past. Sea salt has virtually none, unless it has been added, so if you need a little salt it is the better choice. As you can see, it would be very difficult to avoid iodine completely when it comes to food!

For more on food allergy symptoms read this.

Some may be concerned about an iodine contrast allergy. A contrast is a substance is often introduced to the body to help make X-rays clearer and help the radiologist to spot any problems.

Iodine is found in various medications, and used extensively as a skin antiseptic in surgery

Having a reaction to an iodine-based contrast dye for a radiologic study does not immediately equate to having an allergy. Nausea and flushing can readily occur upon a quick injection of any contrast, with or without iodine in the dye.

There is only about a 3% chance of a reaction to contrast dye if you are allergic to seafood. This is no more likely than if you had an allergy to something else with no iodine in it. And if you have had a reaction to such contrast dye you will most likely not have a problem eating seafood or shellfish.

This chemcial is often used in medicine as a topical antiseptic (e.g. Betadine) – that orange stuff that is rubbed on the skin before an operation, for example. Betadine is highly irritating if left on the skin for an extended period of time (i.e. if left on your skin under a long term bandage). This reaction would look like a burn and could develop blisters.

Amiodarone is a cardiac drug that contains iodine (75 mg in a 200 mg tablet). Approximately 10% of this is released into the patient’s system which may increase the risk of a hypersensitivity reaction in iodine-sensitive patients. Even though this risk exists amiodarone has still be used successfully when needed in patients with iodine sensitivity.

As you can see, iodine allergy and sensitivity can be difficult to understand and work with. You are more likely allergic to some protein in a food, for example, and not the iodine, no matter how much of it is present. Our bodies have iodine in them naturally so we probably cannot be completely allergic to it or we would all be very sick from birth!!

It can, however, burn the skin if left on it so it could look like an allergy, but is not. Work carefully with your doctor or a specialist to determine exactly what you are allergic to and what to do about it.

Previous Post Not Every Food Reaction Is An Allergy